The site I built for the Jaybridge Challenge is now live through Feb 11th:

I am working now on improving some graphics around the leaderboard.

I’ve been playing with Google App Engine for a while now and overall found it very easy to work with. When I mention GAE to people, most have never heard of app engine, so I thought I would provide some background, highlighting my experience so far.

Wikipedia provides a great definition of Google App Engine, as a “platform as a service”. Basically you upload your code and your application is hosted by google and scaled automatically based on usage. The service is free below a certain threshold and you can pay for more bandwidth, storage, etc. as needed.

The public facing pieces are pretty simple and obvious:

The most interesting pieces are under-the-hood or part of the Administrative interface:

It’s a nice project. The udacity class was great prep and I have learned a bit more regarding email authentication, API design and other robustness requirements for this site. It will be fun to see what sort of attacks we will get when it goes live.

We are beta testing the programming competition site I built for an upcoming Jaybridge Robotics recruiting event. Yesterday the site went down and pretty much all page queries returned a 503 sever error. Looking in the log history even simple GET requests like favicon.ico where timing out:

Investigating this warning revealed what many developers of low traffic sites have deemed an un-usable flaw with GAE. A flip side of the benefit that GAE provides of automatically scaling up your site if you have increased traffic, is that they will also shut down your site if there isn’t any traffic, which means requests may require your entire process to be started before requests are serviced. Since there is a 30second timeout on requests, if your app’s startup is slow (especially a problem with java, but shouldn’t apply so much to this python app) users will see greater latency or errors if the request can’t be serviced in time.

This “feature” is core to the GAE service, but they now offer services to paid subscribers to minimize this risk. You can pay for a minimum  number of idle instances which will ensure you app is always ready to serve new requests. There is also an “Always On” feature which should help. I will update this when I switch to the paid service and learn more about it.

Another solution not recommended by google is to keep your site warm by regular queries of some sort, this is not desired as a waste of bandwidth and google would rather turn you off and spool up to save resources understandably.

So yesterday my site when down, but I hadn’t made any changes and was not sure why. I am still not quite satisfied (but it is working well again now).  Looking at the traffic to the site I saw it dropped to nothing during the time the site was down, -20hrs to -6hrs in the graph below:

Some requests were further logging this disturbing warning as well:

In the end it looks like it was an app engine problem and not something on my end, lots of other people had the same Error code 121 problem during the same window and their apps having the same issues.

The problem was apparently temporary and I haven’t seen anything since. With regard to spooling up new instances of the app, since we had grading servers checking for new submissions periodically by design, this wasn’t an issue for us. We also upgraded to the paid version and requested 1 idle instance, which should additionally mitigate the issue.

This week I completed the Udacity Web Application Engineering Class (CS253). It was a super useful introduction to:

We built a blog and a wiki (since I don’t care to make them robust to spam, I won’t share them here, sorry). It was a very worthwhile introduction for me! 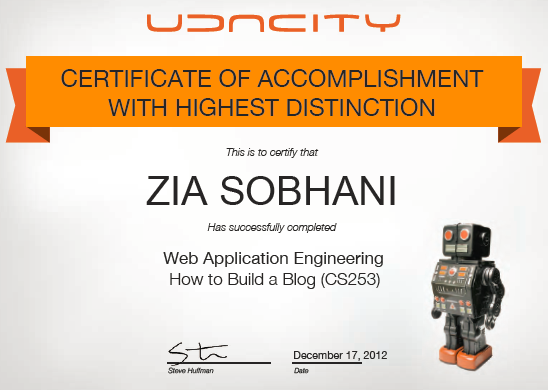