Continuing the work on the Color Prioritized Tree Map, I implemented variable column widths as a step towards making the tree map look more organic. The top picture here is uniform widths for reference and the one below introduced some variable widths, specifically I used a widths multiplier array of [2,3,4,2,5], which is then wrapped to apply a multiplier to the width of each column. This means the second column is 50% wider than the first etc. 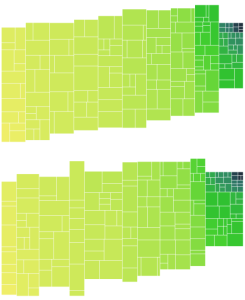 The column widths are assigned before the data is binned, the bin sizes are now equal height instead of equal area. Below is another example. Based on initial testing, the variable widths improve the image best when tweaked and evaluated by eye (since the data set and number of columns also affect the resulting shape). Overall, variable column widths were not as big a gain as I was hoping. Also since the columns are centered on a diagonal, the stepping appearance is retained. I guess introducing variable height would help! But I think the better approach is to look into ragged edges first. 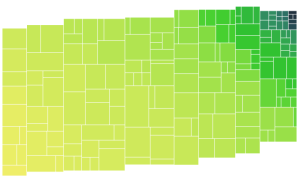 I also tested out a few other data sets, these ones are really lumpy: 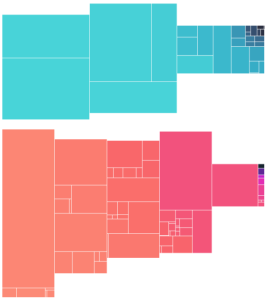 I am still not sure what sort of data will be representative for the target application, but these data sets did stress the viz a bit and demonstrated that the following suspected issues are real: