I was having some trouble visualizing the geoJSON files I generated in the previous post in d3. Does this look like Somerville in blue to you? No?! Well obviously the pink is Cambridge though… 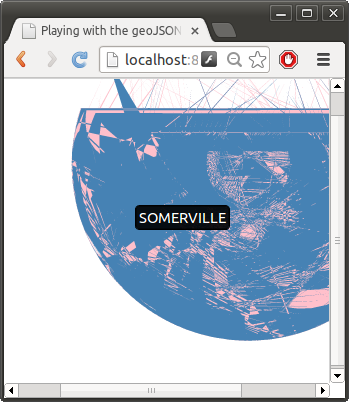 Turns out the problem was the wrong projection. The MAPC data (or most of it) is using the NAD83(HARN)/Masssachusetts Mainland EPSG:2805 (QGIS reports this), also known as,  “NAD_1983_StatePlane_Massachusetts_Mainland_FIPS_2001″ from the .prj in the shape file.

Apparently, pyshp doesn’t handle reading the .prj files very well, it kinda ignores them on purpose (https://code.google.com/p/pyshp/issues/detail?id=3). So using pyshp to convert the shapfiles to GeoJSON probably wasn’t a good choice (no projection info will be transferred to the GeoJSON).

GeoJSON allows for specifying a CRS, but assumes use of the default of WGS84 if none is specified according to the spec. I tried to explicitly set the CRS in the geoJSON, but that doesn’t seem to be working, it looks like the d3 code is ignoring the “crs” property and assuming WGS84 as well.

I then tried saving the layer as GeoJSON with QGIS (version 1.7.5), despite the very nice save dialog and carefully selecting the desired projection, it doesn’t work at all:

However, saving the layer as an ESRI shapefile you can change the projection using QGIS.

I was able to use ogr2ogr to convert the GeoJSON generated by pyshp with no CRS specified to WGS84 (“EPSG:4326″), after which it renders correctly in d3. (Note when I tried different target projections there was still no crs property in the GeoJSON! It looks like support for different crs in GeoJSON is pretty spotty). Here is the ogr2ogr command I used for the simple projection change: 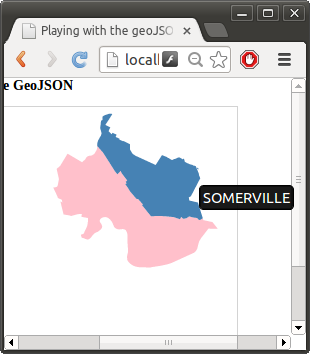 At this point really what is the point of using any tool other than ogr2ogr? For example, the following command converts the Massachusetts municipalities shape file to GeoJSON, reprojects it correctly, and filters out all the cities except cambridge and somerville.

All in one command and it does it correctly (although ogr2ogr doesn’t seem to put crs info in the geojson either, so I’d stick with WGS84 as much as possible).